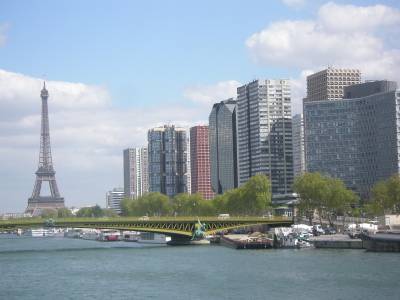 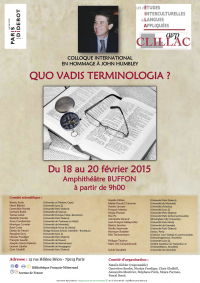 An International Conference in honour of John Humbley

Organized by CLILLAC-ARP (the Centre for Interlanguage Linguistics, Lexicology, English and Corpus Linguistics – Workshop for Research on Speech, EA 3967) at Paris Diderot University

Since its inception, mostly inspired by Eugen Wüster, terminology has undergone several evolutionary changes, conceptually as well as technologically. It has found applications in many different areas, from language planning to web-indexing, all of which have led it to encounter, and sometimes even to mix with, a vast array of different disciplines along the way, such as lexicography, lingusitics, translation studies, technical writing, and so on. Perhaps more surprisingly, terminology has caused controversy, whether to do with the effective legacy of its founding father, the proper sources to be cited in information mining, the prescriptive or descriptive nature of the field, or the relationship between terminology and ontology. Terminology work seems to us to be very close to translation, in that both are, like Flaubert’s author “everywhere to be found, nowhere to be seen”. Like translation, the history of terminology is similar to the history of the nation: language survival and language construction both depend on the capacity of language to name all of the objects of its reality (Michel Serres). Everybody does terminology, and everyone uses terms, even if this is often done unknowingly in an act of carefree naivety or perhaps even careless denial. The same could be said of corpus linguistics, a field which has become inextricably linked with terminology, and which has introduced to the field its own “contextual” perspective, an approach which was originally promoted by the British school of empirical linguists, and which has now come to complement the traditional “conceptual” approach to word meaning. From yesterday’s shoeboxes, to today’s electronic corpora and databases, all of which will soon be interconnected, the data of specialized knowledge, that is to say the concepts and terms as well as the relations which hold them together, are no longer classified, no longer ordered in the same way as they were in the past.

Therein lie the many reasons therefore to organize an international multidisciplinary conference, together with specialists from all of these different areas, in order discuss issues such as unity of the field (or fields) of terminology, as well as to reflect on the current state of these different branches or hybrids of the discipline and to speculate on their future development.

And what if we were to look for a point of contact, a unifying element, a compass in this terminological ocean? We would have to look not for something specifically scientific, but for a specific scientist: someone whose name would be a reference point in each of these different fields. And one name does stand out: John Humbley. Because of the extraordinary wealth of his publications in the many areas cited above, because of the diversity of his professional and institutional experience, because of the contacts he has established and continues to nurture right across the globe, because of his farsightedness and approachability in all of these activities, because of his collaborative work in a multitude of scientific committees… our colleague John Humbley has been and still is a key participant and witness at the highest level of all of the changes in this field. It is in honour of this person, and his work, that we have decided to hold an international conference whose results, after review by an editorial board, will be published in a special edition of a prestigious international journal on translation studies and terminology.